Below we describe a few examples of creative and unique funeral ideas for Celebrations of Life. You’ll see they go way beyond the traditional funeral. Perhaps they will inspire you with some ideas.  So you can create a lasting tribute to your loved ones that friends and family will never forget. 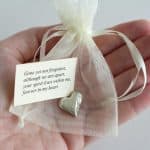 Pewter Pocket Charms
Give this pewter charm to family and friends as a reminder of ... >READ MORE. 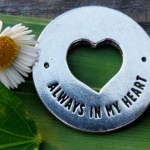 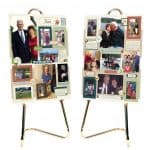 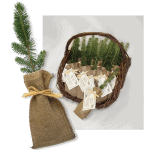 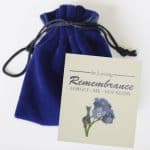 Forget-Me-Not Seed Packets in Velvet Pouches
Give forget me not seed packets with a personalized card attached, to ... >READ MORE. 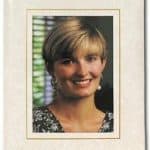 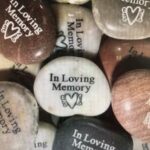 Memory Stones for Funeral, with Heart and Angel Wings
Pocket Memory stones for funeral gift or favor. Engraved with "In Loving ... >READ MORE. 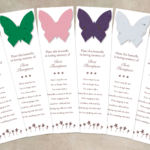 Butterfly Bookmark with Seeds
Share these seed butterfly bookmarks that are personalized with name and poem. ... >READ MORE. 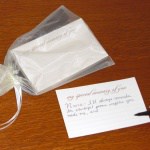 Memory Card Set for Funerals. Share Memory Cards, have guests share their memories
Capture memories of your loved one from guests at the funeral service. ... >READ MORE. 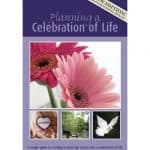 Planning a Celebration of Life Downloadable Book
Get the ideas you need to plan a memorable and unique funeral ... >READ MORE.

Alicia Johnson, a self proclaimed wine connoisseur prearranged her service to include four separate wine tasting ceremony stations established in her garden at her home. Her family and friends walked to each of the four stations.  They tasted wine and experienced the important areas of her life. At the first one, they listened to some of her favorite music. Meanwhile, they enjoyed one particular wine she had invested in.

On the second ceremony station, the funeral director provided each attendee with a message card to write words of comfort to the family.  They enjoyed a different wine and heard her husband talk of their life together. Lastly, they gathered beneath an outdoor tent.  They tearfully watched Alicia in a video in which she talked to them from her bed just weeks before her death. She had heartfelt and loving messages to many members of her family and friends.

Jack Killington was a 52-year old member of the Mohawks jogging club. To conclude his service, he was escorted on ether side of the hearse by tearful jogging Mohawk club members.  Finally they rode together for two miles to the cemetery.

Dave’s Celebration of Life was at his Favorite Place, the Zoo

Dave had a deep love for animals.  And he had many safari adventures with his wife Margaret. It seemed appropriate to make animals the focus of his celebration of life.

First of all, funeral attendees greeted the family under an outdoor tent, outside of the zoo gates. Coffee and cocktails were served. They received a 10-inch square memorial folder printed with the ceremony agenda and pictures of Dave throughout his life.

At the appointed service time, family and friends boarded one of several waiting zoo trains.  They began a slow ride to the first “ceremony presentation.”  This was in front of the outdoor bear pavilion. At this station, several tripods held enlarged photographs of animals that were taken by Dave. These were on display next to a podium with a microphone.

Family and friends got off the trains and gathered around the podium. Dave’s wife, Margaret, began a discussion of her husband and, in particular, their safari experiences and love for animals. At the conclusion of her remarks, she invited others to share memories of her husband. The group then re-boarded the trains for the short ride to the next “ceremony Station”.

At the lions’ pavilion, several more tripods displayed blown-up articles about Dave, his work and his devotion to the animals.  And a display table held Dave’s PETA awards and PETA donation envelopes. Dave’s closest friend, Don Strattermier, talked about his friendship with Dave and Dave’s love for animals. He then introduced Christine, who related her “behind the scenes” experience of Dave’s work in PETA.  She shared several little known but admired successes and breakthroughs he had on behalf of animal rights. At the conclusion of her remarks, attendees had another opportunity to make spontaneous remarks.

The entourage re-boarded the trains and proceeded to the zoo arboretum. Family and friends sat while viewing an eight-minute slide presentation of the deceased life. Photographs taken from the family album showed Dave from his childhood to present, including several safari scenes. The very last picture was a close-up of Dave’s face. While that photograph stayed on the screen, attendees heard four rings of a telephone.  Then they heard Dave’s voice on his personal home message machine.  It was message most of the audience was familiar with: “Hi, this is Dave. I’m on safari, leave me a message and I hope to meet you along the trail somewhere someday.” Following the slide presentation, each person received a three-by-five card and pen to write a message to Dave and/or Margaret.

Following the slide show, everyone could pay their last respects to the deceased, whose body lay in state among the plants and flowers of the arboretum. As they went by the casket, each was greeted by Margaret.  She received their message cards, hugs and loving words.

At the conclusion of the viewing, the funeral procession formed in the zoo parking lot for the trip to the cemetery.

The casket and body was hoisted atop of Dave’s beloved 75-year old elephant Tranzago.  He began a slow trek to “The Teachers Valley”.  It’s a well-groomed animal cemetery at the zoo.  Friends and family followed on foot. They obtained prior permission from the local city Mayors office for the burial.

Although the family was not religious, the funeral director felt that Dave had lived a spiritual life.  A local Buddhist devotee, and friend of Dave and Margaret who could draw those parallels between his devotion to animals and his spirituality, made brief remarks at the committal service.

We have many helpful pages about poems, songs, eulogies, obituaries.  See all pages here. 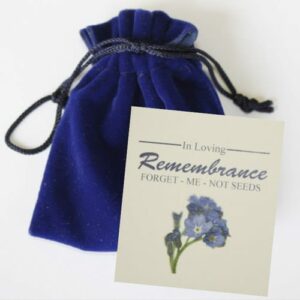 Give forget me not seed packets with a personalized card attached, to gu... 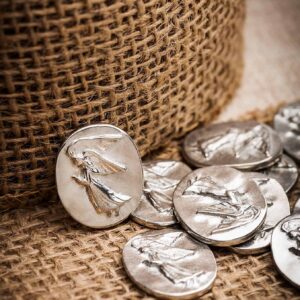 Give this pewter pocket angel coin to family and friends as an everlasti...